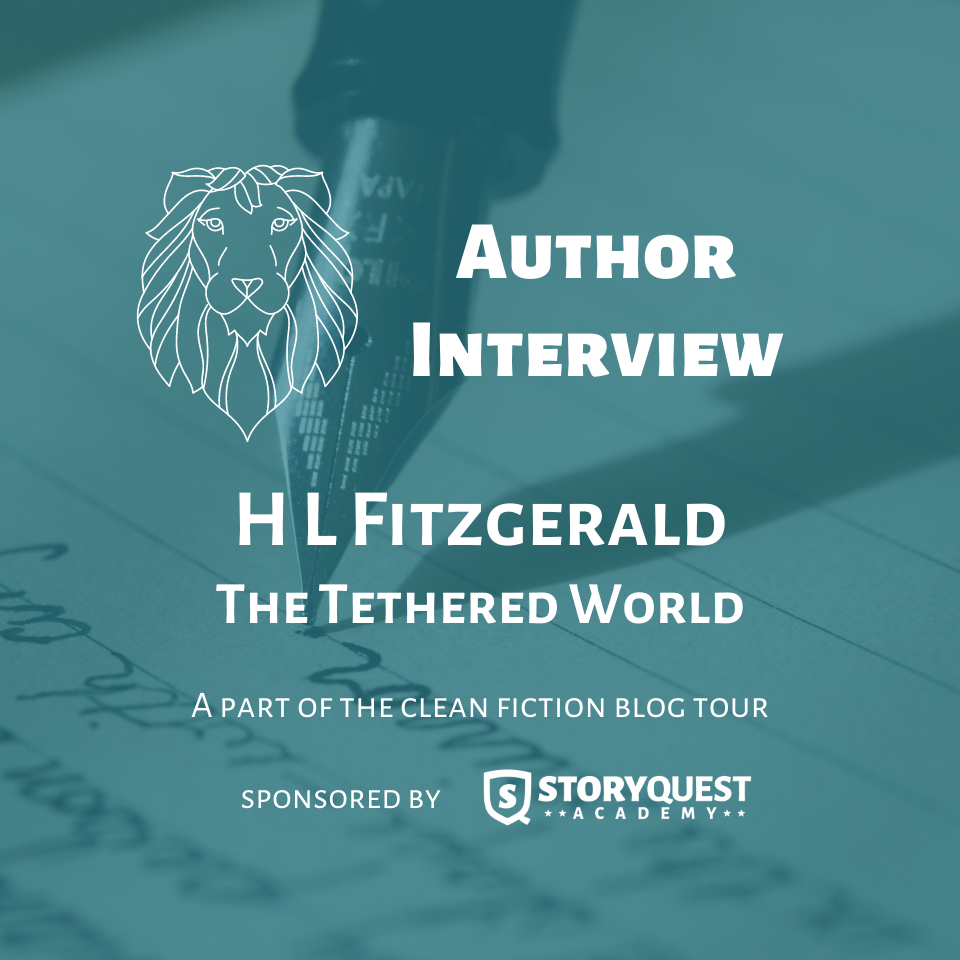 A part of the Clean Fiction Blog Tour

This week, I am interviewing indie author, H.L. FitzGerald. She wrote a wonderful series in the vein of Narnia, The Tethered World Chronicles. It's great for all ages from middle graders up to young adults. You might enjoy reading this one out loud, too! ;)

Q: Who are you? What genres do you like to write?

A: Hey! I’m Heather FitzGerald, former homeschooling mum of four, including one with autism (‘former’ because everyone is now full-size instead of fun-size). I write family friendly fantasy, inspired by my love for Narnia and the sense of hopeful wonder it invokes. I’m also a mystery lover who plans to branch into that genre eventually.

Q: Tell us about your book/s! What was the inspiration for your book?

A: My series is The Tethered World Chronicles and follows a family whose purpose is to keep watch over creatures who once lived in the Garden of Eden. You know… the legends we’ve all heard rumors or read about in folklore the world over. Dwarves, Gnomes, Leprechauns, and even Bigfoot! What if all of those legends are based on a measure of truth? What if there is a world within our own where these creatures now live, having been moved there before the Great Flood?

Sadie Larcen is hesitant to tell anyone about her mother’s strange hobby as a Bigfoot expert, but being homeschooled means her mother won’t be showing up to embarrass her on Career Day. But when Sadie’s parents go missing, she learns that her mother’s hobby is actually the family business and Sadie is the newest recruit. She and her siblings must travel to the Tethered World to rescue their parents as they learn they are a part of something much bigger than themselves.

Those ‘what if’ questions and the desire for more stories that feel as if they could be true (like the Chronicles of Narnia), are what has inspired my books: The Tethered World, The Flaming Sword, and The Genesis Tree.

Though the three part trilogy is complete (available in print, eBook, and audiobook), I am currently working on a fourth and fifth book that will pick up 20 years in the future.

Q: What is your biggest tip for teen writers?

A: Read a lot, put yourself out there as a writer, and be willing to take criticism even though it stings. Also, learn the fine art of NOT being preachy. Your generation needs voices that offer hope and light and truth but won’t listen if it isn’t presented organically.

Q: Why do you write clean fiction?

A: I write things that I would like to share with others, without reservation. That doesn’t mean the subject matter is all butterflies and rainbows. Tough subjects are tackled because life itself is filled with trials and pain and disappointment. But a writer should tackle these subjects in a way that is relatable and conducive to finding hope rather than perpetuating despair.

Q: Why is clean fiction important for youth and young adults?

A: Clean fiction is important because our youth are bombarded with messages of hopelessness, uselessness, conformity, and even death as an answer to problems. More than ever we must hold up light and truth and hope for this generation. I want my readers to learn—if they don’t already know it—that they are part of something bigger than themselves. And to understand that there is a way to find good, even in situations that look insurmountably bad. The beauty of writing fantasy is that it’s a genre which allows that important age-old theme of Good vs Evil to play out on a large scale. I believe we all long to know that we have an eternal purpose, and I hope readers are awakened to that when they read my books.

Q: Who inspired your characters?

A: On a broad scale, my characters are inspired by worldwide myths but there are also Biblical characters and elements. Nephilim have their own realm, the flaming sword used to block the way into the Garden of Eden is important, and more (spoilers!). I’ve played with possibilities in places that the Bible is silent. I don’t think there is any harm with speculation as long as it doesn’t contradict scripture.

On a more personal level, a few of the characters are based on real people, like my son who is autistic. And most of the character’s names are taken from the names of friends and family, with some fun twists (such as Revonika instead of Veronica), as a nod to those that I love.

A: It was important to me to write about homeschoolers in a way that showed how absolutely relatable and normal homeschoolers are. Homeschoolers are NOT some exotic animal to be treated with fascination. They’re just regular people that do things a little differently, but for THEM it’s nothing different or special. I wanted to take characteristics that were ordinary for hundred of thousands of people (ie homeschooling, autism, adoption, and Christianity) and make them a natural part of the characters’s lives. No agenda implied. I’m not trying to convert anyone to my way of life or prove that our way is best. These things are a backdrop which helps to form the character’s personality like other more common issues in literature (the same way other writers might use ‘typical’ things like divorce or sibling rivalries to influence a character).

My hope is that I have handled homeschooling and other less common subjects in a way that allows non-homeschoolers or families that don’t have an autistic child to not feel excluded or as if they can’t relate. Those things are not the main point of the story! The adventures and challenges in the story are things I want all readers to relate to and see glimpses of themselves within.

What Is Story Quest Academy?

Story Quest Academy is a virtual writing and reading academy for homeschooling teens! Each course has a book club focusing on wholesome, clean, classic and indie fiction. Packed with fun activities and easy-to-understand education, we’re teaching the next generation of writers! Learn more about our courses here.